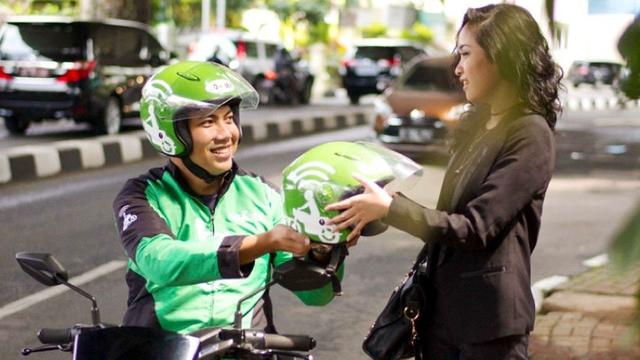 For most people in Jakarta, getting from point A to point B can be quite exhausting if they lack the means to do so. Whilst some have the convenience of having their vehicle at their disposal, others often resort to other transportation methods. One of the most popular ones in Jakarta is a service called Ojol (“Ojek Online”)—which is online ride-hailing motorcycle taxis that you can access on-demand.

We’ve listed a few ways to strike up some conversations with Ojol drivers so you can get to know each other during your ride there!

It’s a common phrase say good morning/afternoon/evening given the right circumstances, and it’s also used to let them know you’re open for conversations. Saying this, whilst hinting you’re a foreigner can excite locals—especially Ojol drivers—since we rarely get to directly interact with foreigners basis.

All in all, if you say this correctly, you’re off to a great start!

A quick way of saying “how are you?”—and if they respond with “Baik (bah-eek)”, they indicate they’re doing well! You might want to respond with “Saya juga baik (sah-ya joo-gah bah-eek)” to let them know you’re also doing fine.

This question is great for openers and can indicate you’re interested in having further conversations with the person you’re talking to.

The phrase above literally means “my name is…,” which is a great way to introduce yourself and let them know that you’re a foreigner. We as locals are very appreciative if foreigners are to learn our language—and chances are, your Ojol driver will be happy to respond to you and might even introduce themselves.

Which means “I come from…,” after you both have introduced yourselves, you might want to let them know your place of origin before moving to Indonesia. If you don’t feel specifying your birthplace, however, you can just mention the country you came from and let them know just that.

Which is a concise way of saying “Which part of Indonesia do you come from?” as the whole region of Indonesia consists of various regions. It’s even near impossible for locals to tell which part others come from based on their accents alone, so it’s a very common question to ask.

This way, not only you can get to know each other, but you can also learn the various dialects & accents every region of Indonesia has!

Directly translates to “I’m currently learning Bahasa Indonesia,” and we think this is a great way to inform the person you’re speaking to that you’re currently learning the Indonesians’ mother tongue. As such, people will tolerate if you made any mispronunciation or spelling mistakes. It also helps us locals to use the best of their English skills to communicate with you.

If you’re a foodie or simply exploring the local delicacy, this is a great way of saying “What is the best local food around here?”, and since driver’s answer comes from a different perspective than yours, you might get a different answer if you ask this to various kinds of people.

You might also try mentioning different kinds of food you’ve tried during your time in Jakarta (and your opinion on them).

While this can provide you with information about the local delicacy, this can also subtly hint that you’re open to exploring Indonesia’s culinary culture. If your driver happens to own a small restaurant, then who knows—maybe you might get invited to eat at theirs!

“Saya kemarin pergi ke…. {the place you went to yesterday}”

Means “Yesterday I went to…,” followed by the name of the place you went yesterday (or the day before that). If you feel like opening up a bit about your last activity in Jakarta, you might want to retell your experience going to various landmarks, shopping malls, or historical museums. The city of Jakarta is vast and extensive that most of the locals don’t have the time to visit the attractions; they’ll gladly listen to your experience doing so.

By retelling your past activity in Jakarta—i.e. where did you go to, how was your experience there, etc—you open conversations while letting them know you’re getting settled in.

Translates to “What does that mean?” where you refer ‘that’ to a phrase in which the other person spoke before. This is usually done to let them know you’re not familiar with the dialect & the slangs yet and are eager to learn the meanings behind them.

If you’re being asked a question in which you don’t know the proper answer to, this is a way of saying “Sorry, I don’t understand,” in a polite way. You’re probably going to use this a whole lot aside from your Ojol ride, but this is also a great indicator for locals that you’re not yet comfortable with Bahasa Indonesia—and you’re saying sorry to them for not being able to understand.

The points stated above are the common—if not the most common—ways of starting a conversation with your Ojol driver. The important thing to underline is to emphasize that you’re just getting settled in and are still learning the basics of everyday conversations.

There’s a lot more to daily Indonesian conversations than the ones we’ve written, so we fervently encourage you to get out there and start talking to the locals—don’t get discouraged if we appear rude in one way or another, that’s just how we are to strangers.

More often than not, people will tolerate you or even help you by speaking English themselves (and interpreting common phrases & slangs) for you to get comfortable faster! Beside learning Indonesian Language, understanding social etiquette is another important thing you have to do.