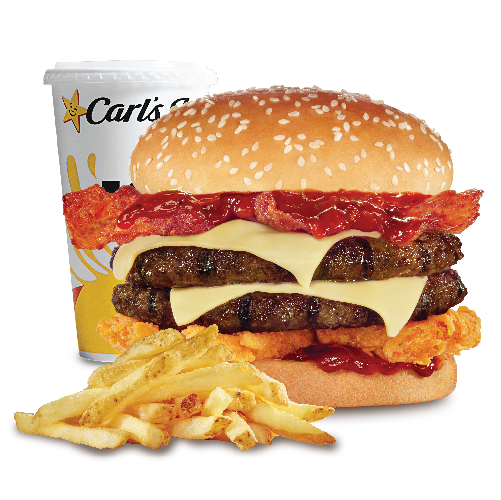 Burger, fried chicken, pizza, fries are all the types of fast food that most people find not only delicious but also convenient to eat. They are all easy to get since numerous fast-food restaurants can be found almost everywhere, especially in big cities and metropolitan areas. One of those said restaurants that are famous for their delicious menus is Carl’s Jr. It is an American fast-food restaurant chain with franchises in North & South America, Asia, Oceania, Europe, and Africa. The presence of Carl’s Jr in Indonesia alone was widely welcomed. Moreover, several of their menus have been successful in satisfying many Indonesians’ tastebuds when it comes to the flavors of their various meal. Hence, we have created this list of the 5 best Carl’s Jr menu recommendations that you should try later.

Let’s check out the list below, so you’ll get to consider which best Carl’s Jr meal you should get the next time you crave something delicious from the restaurant!

Are you meat lovers? If yes, then you should give this menu a try. Double Western Beefbac Cheeseburger is a special burger from Carl’s Jr filled with two large Australian burger patties, beef bacon, cheese, and onion rings. Other than that, it contains a flavored BBQ sauce that will enrich the taste of the whole burger in one bite, adding a little smoky taste to it. Furthermore, you can also choose the combo menu that includes fries and drink, so you will definitely feel full.

Looking for Carl’s Jr best menu recommendation that is well-loved by many people? Well, you gotta try their Portobello Mushroom. It is one of Carl’s Jr signature menus that contains a large Australian burger patty, portobello mushrooms, cheese, lettuce, tomatoes, onions, mayonnaise, and a special mushroom sauce. The mushrooms are soft and juicy with traces of black pepper and onions. Portobello Mushroom burger will definitely satisfy many mushrooms and vegetable lovers out there!

If you look for a quick meal that is going to fill your stomach and taste great, this best menu recommendation from Carl’s Jr is always ready to come to your rescue! Another signature menu from Carl’s Jr that has been claimed as a favorite by many people is Memphis BBQ Burger. Containing a large Australian burger patty, shredded smoked beef, BBQ sauce, crispy fried onions, and slivers of American cheese makes this burger a perfect choice for you meat lovers.

You prefer chicken instead of beef patty? Worry not because this Hawaiian Chicken is absolutely another best Carl’s Jr menu recommendation that is worth trying. If you crave something fresh, with the tropical sweet and sour taste in between your burger buns, then this Hawaiian Chicken will spoil your tastebuds. This special menu contains grilled chicken, teriyaki sauce, grilled pineapple chunks, cheese, onions, lettuce, tomatoes, and mayonnaise. Sounds unique and flavorsome, right?

For a tasty side dish, one of Carls’s Jr best menu recommendations comes in the form of this Beefbac BBQ Cheese Crisscut. This crisscut fries menu is served with BBQ sauce, grated cheese, and a sprinkling of appetizing smoked meat pieces as its toppings. The BBQ sauce along with the cheese will add a savory taste to it. And if you feel one burger is not enough to fulfill your stomach, then you might want to add these crisscut fries as your choice of side dish!

That’s all the 5 best menu recommendation from Carl’s Jr that you can try. So, among all those listed menus above, which one that you think will be your new favorite meal?