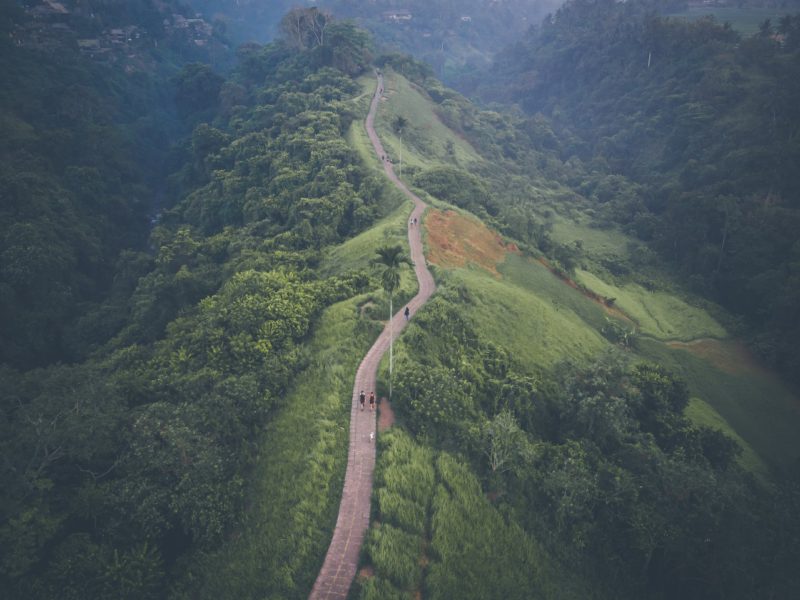 Traveling outside your area for a vacation is one of the interesting things for those of you who want to unwind from increasingly high work demands. Indonesia has a variety of interesting places that you must visit at least once in your life. Indonesian tourist spots are generally famous for their green and close to nature, considering that Indonesia is a tropical country where there are many large trees and high rainfall. Here are 9 Indonesian tourist spots that you must visit!

Borobudur Temple is a Buddhist temple with many stupas erected by Mahayana Buddhists. This temple was built around the 8th century AD during the reign of the Sailendra dynasty. It is referred to as a Buddhist temple and is one of the largest Buddhist monuments in the world. UNESCO designated Borobudur Temple as one of the world heritages in 1991. This temple is suitable to be visited before sunrise so you can witness its majesty and beauty.

Not far from Borobudur Temple, you can also visit Prambanan Temple. This temple is a Hindu temple complex that was built in the 9th century AD under the reign of the Sanjaya dynasty. Worshipped in this temple is Trimurti, namely the three main gods in Hinduism, namely, Lord Brahma, Lord Vishnu, and Lord Shiva. Just like Borobudur, UNESCO designated Prambanan Temple as a world heritage in 1991. What’s interesting about this temple is that you can enjoy Ramayana ballet performances.

Ubud is one of the areas on the island of Bali which is very well known as a center for traditional dances and crafts. It is one of the Indonesian tourist spots that is surrounded by rainforest and rice terraces and the presence of a temple adds to the beauty of the landscape in Ubud. If you are interested in seeing ancient sacred sites, Goa Gajah can be one of your choices when visiting Ubud. In addition, you can find many restaurants and other interesting tourist spots in Ubud.

West Bali National Park (TNBB) is a national park located in the western part of Bali, which includes the Jembrana Regency and Buleleng Regency. The park consists of a forest and savanna habitat in the middle which is dominated by the remains of four volcanoes from the Pleistocene Period. There are about 160 species of animals and plants that are protected in this national park such as bulls, deer, bats, langurs, and various types of birds. In addition, this national park is also a habitat for endemic Bali animals that are almost extinct such as the Bali Starling.

If you want to enjoy a vacation experience with various aesthetic photos, Labuan Bajo can be the right choice. The city is located in the Komodo District, West Manggarai Regency, East Nusa Tenggara Province. Various tribes inhabit this area, the majority of whom come from the Manggarai Tribe. Most of them work by growing various vegetables and raising various animals. There are various tourist attractions that you can visit in this area such as Cunca Wulang Waterfall, Wae Rebo, Sawah Lingko, Batu Cermin Cave, Rangko Cave, and many more.

Sumba is an island located in East Nusa Tenggara. It is one of the Indonesian tourist spots bordered by other large islands in East Nusa Tenggara such as Sumbawa and Flores. Just like Labuan Bajo, this island is also famous for its natural beauty. You can visit various tourist spots on this island such as Matayangu waterfall, ancient sites, Walakiri Beach, Kanabu Wai waterfall, Wairinding Hill, Weekuri Lagoon, traditional villages, Bawana Beach, Waimarang waterfall, Tanggedu waterfall, and Nihiwatu.

Ijen Crater is an acidic crater lake and is part of the peak of Mount Ijen. This lake has a depth of 200 meters with a crater area of ​​5,466 hectares. This lake is also one of the largest strong acid lakes in the world. In addition, it is included in the Ijen Tourism Park Nature Reserve, Bondowoso Regency, and Banyuwangi Regency. What’s interesting about this crater is the Blue Fire natural phenomenon which can only be seen at night. This is unique considering that this phenomenon only exists in two places in the world, namely in Indonesia and Iceland.

Mount Bromo which is also known as the Tengger Caldera is one of the Indonesian tourist spots in form of an active volcano with an altitude of 2,329 meters above sea level. This mountain is included in the Bromo Tengger Semeru National Park area. The splendor of Mount Bromo is one of the tourist spots that should not be missed. The view of this mountain is like a land above the clouds, which is complemented by an extraordinary view of the Bromo crater.

White Crater is one of the Indonesian tourist spots located in Alam Indah Village, Bandung where it is a lake formed from the eruption of Mount Patuha. What’s interesting about this crater is that the water sometimes changes color and it also has white sulfur mixed soil around the crater. Changes in the color of the water in this crater occur due to weather changes. The combination of the water color and the fine white sand gives the visitors a different world impression.

Those are 9 Indonesian tourist spots that you must visit! Indonesia is very rich in tourist attractions from the tip of Sabang to Merauke. You can visit any or all of the above tourist spots. Happy holidays!