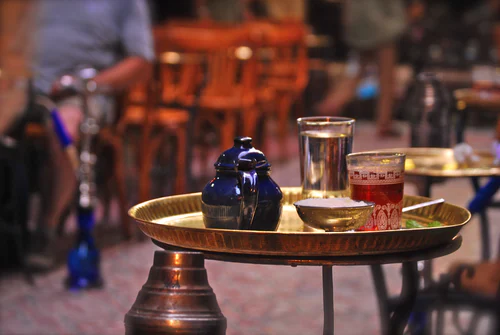 As the capital city of Indonesia, Jakarta has embraced enormous globalization from all over the world thus resulting in many newly established cultures from outside Indonesia. One of the newly established cultures is the cuisine, which is why many restaurants from all over the world are opening their branch in this city, introducing it to both locals and foreigners there. Some of the restaurants came from the middle-east or Mediterranean area, which brings out many foods or newly accultured-style foods from there. If you are one of the locals who want to try some middle-eastern food or foreigners from that region who haven’t adjusted into the local taste yet, here we’ve listed some of the best Mediterranean restaurants that you can find in Jakarta.

Located in the eastern part of Jakarta, specifically Jatinegara, Al Sadda Restaurant is one of the famous middle-eastern restaurants that you can find from all around Jakarta. It has that unique Arabian atmosphere when you’re entering the restaurant with its interior design that will surely increase your eating experience and feel like eating directly from the Middle-East area itself. All the menus are mostly comprised of Lambs, without a doubt, and some kebabs and bread named khubz which are considered side dishes. You can either buy a full lamb stew for Rp1.900.000,00 which can be served for 10 people, ½ lamb stew for Rp950.000,00 for 5 people, and ¼ lamb stew for like 2 or 3 people approximately.

“Overall the food was good, the staffs are friendly, and the place not too big but it’s very clean.”

One of the reviews in Zomato

Another famous middle-eastern restaurant that you can find in Jakarta is Abunawas Restaurant. Named after the popular fictional Arabian character “Abu Nawas”, this restaurant has established 2 outlets in Jakarta which are on Kemang and Matraman. This restaurant also has that middle east look on its interior design, which results in a good middle east dining atmosphere for most of the people. One of the main and favorite menus among customers is the famous Mandi/Biryani/Zurbiyan traditional middle east rice which is served by either lamb or fish according to your taste.

Other selling points of this restaurant is how it offers VIP or private rooms for families or a group of people who want to have their best eating experience with no qualms or noise from the outside. This VIP room has its air conditioner and interior design that will surely give you the best middle east experience with your friends or families. This restaurant also offers catering services so if you want to hold a middle-easter style event upon your sleeves, this restaurant might provide necessary food supplies for you.

“All the food we had there was delicious, the salad was refreshing, a nice portion.”

Famous for the middle-eastern restaurant in Jakarta, Al Jazeerah Signature is one of the many restaurants which offers expansive quarters with outdoor seating. This restaurant is among the most expensive middle eastern restaurants in this list, estimating Rp350.000,00 on average for two people. However, the price doesn’t tell lies as the service offered and the atmosphere inside the restaurant was among if not the best around other middle eastern restaurants. The place itself is very cozy and it offers a wide range of foods, not only the usual lamb and biryani rice but also Arabian steaks and sandwiches. It’s a good place for you if you want to try some exotic middle eastern foods here!

“The food is great, I love the rice here such as briyani and mandhi. They are aromatic and delicious as expected. The meat in my opinion is very tender and fall-off-the-bone kinda quality. I recommended this place if you like middle-eastern cuisine. The waitress and waitresses are friendly as well.”

Moving to the further west of the region, we have Sindbad, a family-friendly middle eastern restaurant. Located in Palmerah, this restaurant is the second most expensive middle eastern restaurant among this list, averaging for Rp300.000,00 for two people approximately. However, as the Al Jazeera Signature provides, this restaurant doesn’t tell lies regarding the price because the services provided are top-notch and the interior design resembles that of a house so it’s mainly targeted for families around Jakarta. One of the famous menus in this restaurant is the usual biryani rice and lamb stew which are the main courses. If you’re coming from the middle east family and don’t know where to go for your hometown cuisines along with your family, this place might be a good option for you!

“Been here with my colleagues. The place is quite big, and there are a lot of seats available when I came on weekdays. I ordered Mandi Laham, the lamb is juicy and yummy.. they served it with yellow rice.”

Last but not least, Shisha Cafe is one of the famous and the usual go-to for many Jakartans to eat middle eastern foods. This restaurant has opened up to 3 areas around Jakarta which are in Menteng, Gatot Subroto, and Kemang. The price is in the middle among other restaurants in this list so if you’re not up to the luxury budget you can go to this place. The interior design is comparably more elegant and luxurious compared to other middle eastern restaurants on this list and the services provided are very fast and friendly! Its main courses are called homemade main entrees because they’re very much what homemade middle eastern foods look like and taste like. If you’re getting bored with lambs, worry not, because this restaurant also serves other meats such as beef, chicken, or fish. You won’t find pork here because middle easterners are mostly Islamic and they’re prohibited to eat porks.

“Went with family for a dinner visit. The experience was great with awesome food, nice ambiance, and some belly dancing to boot! We tried the pita chips with chili, eggplant chickpea with vermicelli rice and feta cheese salad. All were scrumptious. The service is to the point and no-fuss. Will visit it again.”

So what are you waiting for? If you’re a fan of middle eastern cuisines and don’t know where to go in Jakarta, this list might help you get what you need. Try to give these places a visit sometimes and don’t forget to follow the local health protocols!