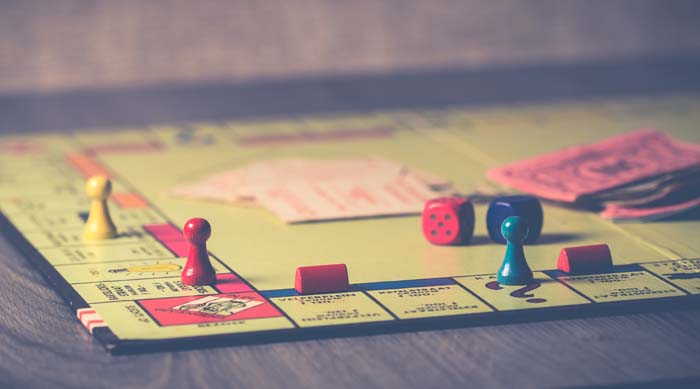 Old-School Games to Play in a Roommates-Only Get Together

Do you feel like you’ve been ignoring your roommates and have never really spent the time getting to know them?. Spending quality time with your roommates is fundamental in nurturing a pleasant and friendly atmosphere at home.  However, we can acknowledge that it is a challenge to find an activity that everyone can enjoy since you don’t really know each other that well yet. Alas, what usually happens is that people will start to pull out their phones, do their own things, and the purpose of the whole thing would be forgotten. Fortunately, we have several recommendations for fun old-school games that will make you forget about everything and have the old-fashioned quality time where phones are not in sight.

The infamous board game known for ruining friendships is our top recommendation for your get together. With the sole purpose of the game is to drive your opponent into bankruptcy, we can understand why Monopoly has a bad rep. Despite its infamy, Monopoly has become a classic board game to play in house parties or other small gatherings. The charm of fighting over lands and owning properties has definitely taken over the players as they often get very competitive. Still, Monopoly is as fun to play as any other board game, just a bit (or a lot) more ruthless.

This crowd favorite is a nerve-wracking yet super entertaining game. Jenga is pretty simple and straightforward. Players take turns to remove blocks from the tower and place them on top, which causes the tower to get higher and higher. Nowadays, this game has many variations with giant blocks provided so you can build a Jenga tower that reaches the ceiling of your home. Jenga is one of those games where everyone can join in on the fun.

Because the game is fairly simple, Jenga is a great choice to play when you want to get to know your roommates, while still having lots of fun.  The excitement of Jenga lies in the anticipation when the tower gets wobbly and finally breaks down. Roars of laughter and cheers will undoubtedly be heard when that happens.

Originally developed in 1979, the iconic UNO card game has swept over the world and sold millions of decks worldwide. UNO is another get-together favorite that can be enjoyed by everyone. It is a fast-paced game with fairly simple rules which can be learned in a few minutes. However, different regions have different rules which often makes the game much more challenging.

Similar when playing Monopoly, your friendships will be tested in UNO as there are several cards that are purposely made to disadvantage your opponents. Savagely defeat your opponents with a barrage of plus four cards or be a dear and do your friend a solid and change the color to their request, it is entirely up to you how to play this game. However, different regions have different rules which often makes the game much more challenging.  UNO is a battle of wits between the players, i.e. competition of memory, concentration, and reaction time.

In Akeelah and The Bees, winning a scrabble game might be a huge deal but in reality not so much. Scrabble is a relaxing word game for two to four players where points are gained by forming words using wooden letter bearing tiles onto a 15 x 15 grid board. Originating from the USA in 1938, Scrabble is a British and American favorite that has been sold in over 120 countries and is available in 29 languages.

One might say that this game is nerdy, which is true, but it is also perfect for adults who just want to take a breather and avoid unnecessary ruckus. You can play classic gameplay where you follow the original rules or you can try a more challenging one with World Scrabble, where you play using more than one language. There are endless possibilities with Scrabble! Plus, the game is good for sharpening your vocabulary and memorization skills. Whether you are a master speller or a beginner, Scrabble is a fun game for everyone.

Different from the other games we’ve mentioned, this is a game of physical prowess. Twister is a popular party game and even has a place within the  American National Toy Hall of Fame. The game is played on a white mat on the ground containing six (or more) rows of large different colored circles. The players then spin the wheel that decides which color their hand or foot has to touch. The aim of the game is to place your hands or feet on the circles shown by the wheel while avoiding stumbling onto other players. All in all, it is a family-friendly game and is a good chance to be closer (or a lot closer) with your roommates.

This ultimate party game is a fast-paced word guessing game released in 1985 by Angle Games Inc. It is a great choice for an ice-breaker when you have your first get together with your roommates. The game includes a game board, playing pieces, category cards, a sand timer, and a dice. The game begins with a player from each team drawing a picture based on the picked category cards while the other players try to guess the word, the winner is the one who guesses the word first. Learning how to play Pictionary is easy after you get a hold of the rules.

Playing this game, it is almost guaranteed that you’ll have a hilarious time trying to make sense of your teammate’s hurried scribbles. Have a great laugh at each other’s drawings, become frustrated with your teammates’ inability to guess, and generally have a wonderful time with your friends. Overall, Pictionary is a fun family-friendly activity suitable for everyone.