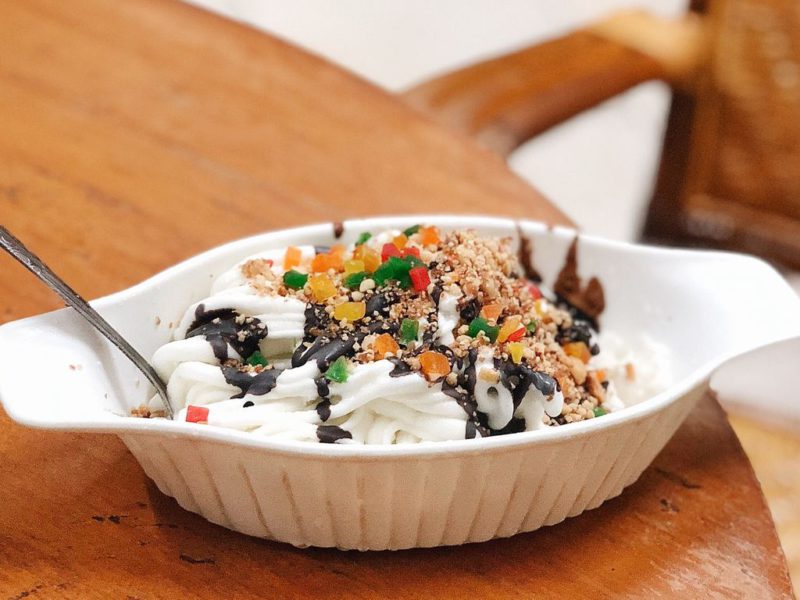 Central Jakarta is one of the administrative cities of Jakarta and also a place of government offices and the Presidential Palace is located. Central Jakarta offering an upscale and luxurious environment that can spoil you. However, it also has another section that offers a different but refreshing atmosphere, namely tourist attractions with the concept of Tempo Doeloe. Tempo Doeloe is a name used to describe Indonesia in ancient times, more precisely during the period year of 1870 until around 1914. Traveling to a place with the concept of Tempo Doeloe certainly gives a different feeling, nostalgia, or new experience that you might have never felt it before. One of the places that can bring you to feel the past is Ragusa Es Italia (Ragusa Italian Ice Cream) located on Jl. Veteran, Jakarta Pusat.

Nothing can beat the freshness of eating ice cream after a long day of activities, more especially if the weather in Jakarta is warmer than usual. Ragusa Italian Ice Cream is one of the iconic and legendary ice cream shops in Jakarta. This shop provides freshly made ice cream and is processed from cow’s milk without preservatives. Certainly, there are reasons for some places being referred to as a legendary place. This store famously known to maintains its ice cream flavor even though it has been established for more than 80 years. Ragusa Italian Ice Cream also claims that they have never changed their ice cream recipe, even more, they are still using the same type of ice cream mixer that is more than 60 years old.

In addition, this legendary ice cream shop also gets its nickname because of the ambiance of the place. It never changes despite having passed a long time. Many Jakartarians come to visit here to feel the nostalgia of Tempo Doeloe. This place also received a MURI (Indonesian World Record Museum) record as the oldest ice cream shop that is still open today. Ragusa Italia Ice Cream used to have many branches, but now, the branch on this Jl. Veteran becomes the only Ragusa Italian Ice Cream Shop in Jakarta.

Ragusa Italian Ice Cream has never changed its interior of the shop since it was first opened, even the menu that was served was still the same as when it was first opened. Entering the Ragusa Italian Ice Cream shop, you will feel as if the time has stopped at this place. You will be greeted with an atmosphere just like in the 1930s, with chairs and tables made of rattan, as well as black and white photographs displayed on the walls to decorate their shop. There are four types of ice cream offered at Ragusa Italian Ice Cream, in line with affordable prices. First one is Regular Flavored (Rp. 15.000 – 20.000) consisting of Mocca, vanilla, strawberry, and nougat flavors, second is Premium Flavored for Durian and Raisin (Rp. 20.000), third is Mixed Flavored (Rp. 20.000 – 25.000) for Coupe De Maison and Special Mix flavor, and last but not least, Fancy Flavored (Rp. 25.000 – 35.000) for Chocolate Sundae, Tutti Frutti, Cassata Siciliana, Banana Split, and Spaghetti Ice Cream.

The most favorite menu at this place is Nougat, Banana Split, and Tutti Frutti. However, you should not miss trying Spaghetti Ice Cream, which is the most unique menu here. Spaghetti Ice Cream is a spaghetti made entirely from ice cream and has a very soft and creamy texture. This ice cream, for obvious reason, is served in the form of spaghetti completed with topping made from dark chocolate and dried fruit bits. This menu also comes with a satisfying size.

Read also : Desserts You Can Find on the Streets of Jakarta

You don’t need to worry about the transportation access if you want to visit Ragusa Italian Ice Cream. You can use public transportation modes that are available at prices that are friendly to your wallet. If you use the Trans Jakarta bus, you can get off at the Juanda bus stop, and if you use the KRL Commuter Line train, you can also get off at Juanda station. The Juanda bus stop and station are close to each other, from there you can immediately continue your trip by walking less than 1 km away. Also, don’t forget to bring your e-money card since these two modes of transportation do not accept the cash payment method.

Ragusa Italian Ice Cream is open every day, starting at 10 am to 10 pm, but if you decide to visit on a weekend or holiday, you must be prepared to queue to get a seat, because this place is very crowded on the weekend and public holidays. However, you will not wait long to get the ice cream that you ordered, because when you order at the counter, the seller will immediately make your order and you can immediately enjoy your ice cream.

An ice cream shop that has stood for more than 80 years of course has a rich historical background. The name Ragusa is taken from one of the cities in Sicily, Italy. The founder of this shop is indeed an Italian, who used to have a very successful tailor business in Jakarta. They were Luigi, Vincenzo, Pascuale, and Francisco, who eventually became known as the Ragusa Brothers. Success with his tailor business, Ragusa Brothers got the idea to make another business after getting acquainted with a Dutch woman who owned a cow’s milk farm. They finally decided to make an ice cream shop by using the milk from the women’s farm. And finally, the iconic Ragusa Italian Ice Cream shop was created in 1932. Although Ragusa is famous as an Italian ice cream shop, the ice cream they make is actually not gelato. The recipe they use is almost similar to Es Doger, the traditional Indonesian coconut milk and shaved ice drink.

Ragusa Ice Cream Italia is perfect for you to visit, relieving your stress from a week’s work with the atmosphere of Jakarta in the past, which, of course, has its own beauty and uniqueness. The sensation of eating the best ice cream in an iconic place is second to none.