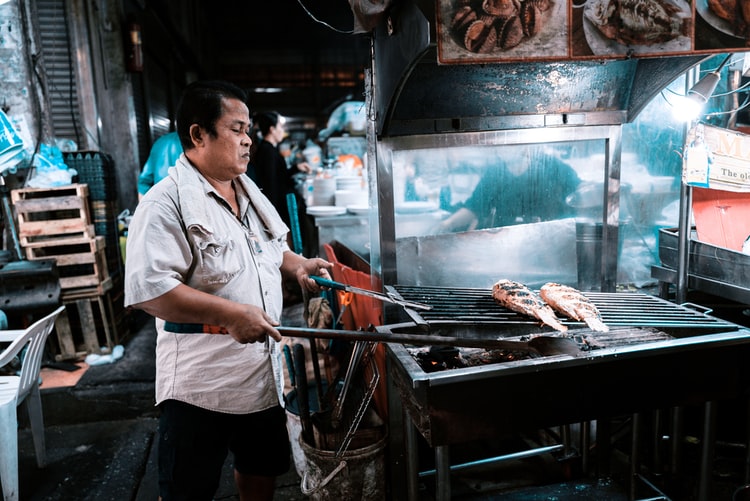 Classic Jakarta Street Food to Eat on a Date

The way to a person’s heart is through their stomach, an old proverb says. The same goes for us, Indonesians. Taking us out to a classy Italian restaurant is all fine and dandy, but you need a little bit of more ammunition to pierce through our hearts. Something closer at home and more comfortable.

Indonesians all come from different towns and different cultural backgrounds. That’s why everybody has their comfort food that may be different from others. Me? I like Baso Tahu Siomay Bandung the best because I’m from Bandung. But just because it’s not Bandung, doesn’t mean I can’t enjoy Baso Tahu Siomay in Jakarta.

And that’s the beauty of Jakarta. Whatever comfort food you want to offer the captor of your heart, it’s going to be here somewhere. If you’re not sure what to present them with, don’t break down just yet. Here are some of Jakarta’s street foods that’ll be sure to win anybody’s heart.

find out more about best street food center in Jakarta

Martabak. Terang Bulan. Apam pinang. Apam Balik. Whatever name you call it, or wherever you think it originated from, martabak is a shining star in Indonesia’s gastronomic galaxy.

In case you haven’t had the pleasure of tasting Indonesia’s King of Street Food, Martabak is a folded pancake with a savory omelet filling (martabak asin) or sweet toppings (martabak manis).  The most defining feature of Martabak, however, is the crispy skin. It either envelopes the filling like in the case of martabak asin or graces the edges of the fluffy martabak manis like a pizza crust.

Now, we can recite the history of Martabak in Indonesia and how martabak asin and martabak manis started from two different cuisines, but we’re not here for that. The important thing you need to know is that martabak has a special place in the art of courting in Indonesia.

Back in the day, when our parents were still dating and coming to each other’s family houses, boyfriends would come over with a box of piping hot martabak. Their aim is not just to win the heart of their intended, but also the entire household since martabak is usually a snack that’s shared among friends and family.

Now, you too can partake in this tradition! Ask your crush out on a culinary night or make your feelings known by dropping a box of piping hot martabak.

No need to introduce what sate is here, assuming you’ve been around in Indonesia for longer than a day (locals will ask if you’ve tried sate every chance they get). It is, after all, the crown king of Indonesian culinary.

Sate grows and develops in many regions across Indonesia, from Padang to Makassar. It’s no wonder that it’s become comfort food for many, locals and Indonesians alike. That’s why it’s common for friends to go out in the evenings to eat sate right by the gerobak.

If you’re bold enough to go beyond just ordering sate to deliver to your crush’s home via Gojek/Grabfood, ask them out on a date at popular haunts like Sate Sabang Pak Heri or Sate Sabang Kim Tek.

You can also mingle with the fellow kids and try the trending Taichan sate at stalls like Kedai Uncle Do at Tebet or Sate Taichan Manggarai.

Eating sate doesn’t always have to be on the streets either. Have a fancy dinner date at Sate Khas Senayan and their subsidiary Tesate Restaurants.

If you haven’t seen or tried this traditional Jakarta street food at Pekan Raya Jakarta, where have you been all this time? Kerak Telor is the Betawi people’s culinary treasure and Jakarta’s prima donna cuisine (even back in the Colonial era).

Kerak Telor, in its most famous incarnation, is a gelatinous rice omelet served with toppings such as fried shredded coconut (serundeng), fried shallot, and dried shrimp (Ebi). It’s served piping hot in Nasi Padang wrapping shaped into a tube. Some people prefer it spicy, but others like it mild just as fine.

Just like any other street foods, the magic of kerak telor is in the making. Invite your crush to step out into the night breeze and watch a kerak telor vendor do his craft. Or you can take them out to see the wonders of Jakarta and buy kerak telor at Monas and Kota Tua. For a more enhanced experience, traverse the Betawi Cultural Village at Setu Babakan to fully grasp the rich heritage of Kerak Telor.

Kerak Telor is also not that hard to make on your own. Set up a dinner party and invite your crush over to make Kerak Telor together. After all, there is no better way two put two hearts together than cooking.

Yet another pride of Betawi’s culinary culture, Kue Pancong is a type of cake that’s most often confused with other similar-looking food like the sweeter Kue Pukis and the West Javan Bandros.

This unique cake’s ingredients are glutinous rice flour (or just rice flour), coconut milk, and shredded coconut. The batter is then poured onto a mold and heated until the edges are deep brown. The savory filling stays half-cooked, wonderfully melting in your mouth as you take a bite.

Just like with Kerak Telor, we recommend that you enjoy it on the spot. Sit down on the curb and get to know your crush better as you wait for the vendor to finish your order. Traditional Kue Pancong vendors are thankfully a dime a dozen across Jakarta, so you won’t have to wait for the next Pekan Raya Jakarta to roll along.

However, the most famous Kue Pancong are in fact, the more innovative ones. The kue pancong at Kue Pancong Rawa Belong, for example, has a wide variety of flavors such as chocolate, cheese, cheese and eggs, corned beef, and many more.

Another cafe that takes a creative spin on kue pancong is Pancong Bro. They serve colorful and festive kue pancong with intriguing toppings such as Fruit Loops and gummy bears.

So there you have some of the best street foods that you could give to your Indonesian crush! We hope this list helps you! Good luck!