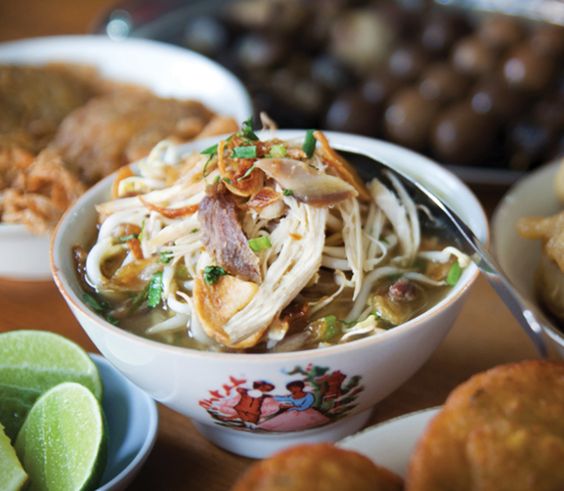 8 Types of Soto in Jakarta

Soto is one of the most iconic cuisines in Indonesia. You can find it across the city without a problem if you want it for breakfast, lunch, or even dinner. Soto is a traditional Indonesian soup served with meat, vegetables, and traditional crackers. It is considered to be comfort food and is normally served as a main dish or a sharing dish. You can find a lot of stalls, stands, and even restaurants that serve soto as it is that popular. There are a lot of types of Soto in Indonesia, as it is served from Sumatera all the way to Papua. To help you find your favorite type of Soto, we have a list of recommendations for you to see.

Soto Betawi is probably one of the most common types of Soto you can find in Jakarta. It is considered to be Jakarta’s signature dish. It’s made with mixing beef broth and coconut milk as its base and adding beef or chicken meat and vegetables. The broth is slowly simmered until all the flavors have already sunk in. It is known to have a yellowish-white thick and savory broth due to the coconut milk. It is perfect to eat during lunch and dinner as it’s warm broths is refreshing. Soto Betawi is normally enjoyed with rice and pickles on the side. Salt and pepper are also available to add if the eater wants to make the broth even more savory.

This Soto is originally from Bandung, West Java, and is known for having radishes in its broth. Soto Bandung broth is made from beef broth and various types of spices. Its broth is also clear as it doesn’t use any coconut milk as one of the ingredients. To finish it off, it is added with cuts of beef, vegetables, and it’s an iconic ingredient, white radish. Soto Bandung sometimes is served with the main ingredients and the broth in two separate bowls. The dish is typically accompanied by traditional Indonesian sambal and rice with roasted shallots.

Soto Padang uses beef broth as its base without the use of coconut milk. The taste of the broth is savory and a little sour, because vinegar is added for acidity. Soto Padang is usually served with beef jerky and Perkedel. Another distinctive feature is the presence of traditional Padang pink crackers as a compliment. Soto Padang has a savory taste derived from the beef broth. To add to the deliciousness, you can also add lime slices to the broth.

Soto Mie is just like your typical Soto, but it’s special as it’s served with yellow noodles. It is famous for its various toppings and side-dishes to eat with the Soto itself. Soto Mie can be served with both clear and coconut milk broth. Other ingredients that may be used are onions and garlic, lemongrass, and sometimes Koya. Its yellow noodles are made with wheat flour and soybean oil. The broth is also filled with a selection of beef or chicken meat and a piece of the spring roll. It is commonly served with rice, sambal, and traditional crackers. A traditional chili sauce or sambal is also usually served to give the Soto a spicy taste.

This type of Soto uses coconut milk in its broth to make it quite thick. In addition to its thickness, the broth’s flavor is also rich with spices. To make the broth, you need to boil the beef stock and let it cook to make it flavorsome. Then you mix in the broth with the coconut milk to give it the creamy flavor. Soto Medan can be served with beef, chicken, or even shrimp. The beef and chicken were marinated and cut first before it was served with the broth. Besides those three things, Soto Medan also consists of potatoes, gnetum chips, and sliced eggs. Bean sprouts and vermicelli are sometimes added to the broth at the end to give the Soto more texture.

Soto Kudus is one of the most popular types of Soto in Jakarta. It has a unique presentation as it is served with a small bowl. Its broth is clear and is made using chicken broth. Before using chicken broth, people used to use buffalo broth, but it takes too much time. You can pick either to eat it with beef or chicken meat as its filling. The bowl is usually filled to the brink with the broth, meat, and vegetables such as bean sprouts and vermicelli. Soto Kudus is usually paired with side dishes such as rice and a variety of Satays. The Satays served are usually consisted of an egg Satay, intestine Satay, and liver and gizzard Satay.

This Soto is unique as it uses chicken broth unlike other types of Soto. The chicken broth is also mixed with coconut milk, lemongrass, and bay leaf. This Soto uses vermicelli, roasted peanuts, and chicken meat in its fillings. Its broth is known to have a bright and white color to it, as it uses chicken broth and not beef broth. To top it off, the dish is served with rice and sometimes lontong as a side dish. Slices of lime are also usually available to give the broth more acidity.

Coto Makassar, as the locals called it, is known for its brown and reddish broth. This dish has quite a lot of toppings such as beef, cow intestines, and cow liver. It is probably one of the few types of Soto that uses offals as one of their main ingredients. To prepare Coto Makassar is not an easy task as it is time-consuming. You need to simmer the broth and wait till the meat is tender and only then you can serve it. Coto Makassar is usually served with slices of lontong instead of rice, unlike any other Sotos. It is also normally served with an Indonesian traditional chili sauce to give the Coto a bit of a spicy flavor.

So these are 8 different types of Soto that you can find in Jakarta. We hope this list can help you fulfill your Soto cravings and don’t forget to check out our other recommendations on our blog! Click here to see soto places in North Jakarta!