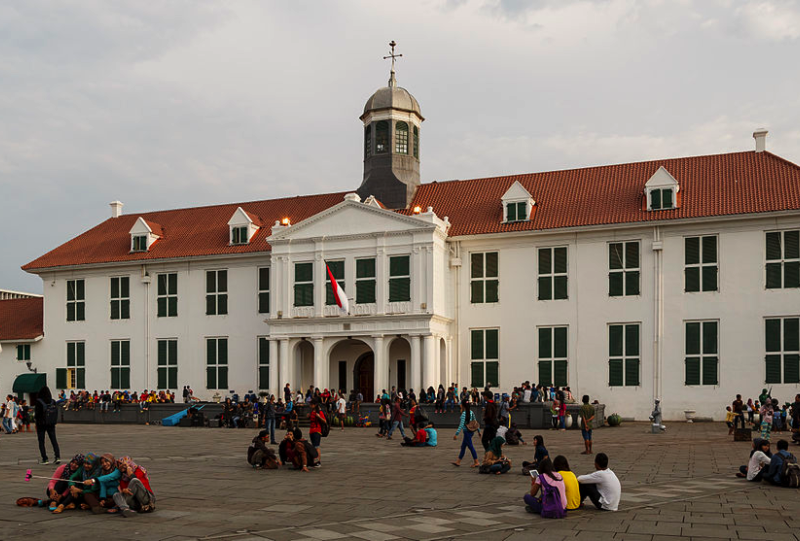 Historical Landmarks to See in Jakarta

Each city has historical value and several landmarks to see, in this list, we provide a list for you to visit in Jakarta so you don’t miss it. With a variety of values, it will certainly make your impression in Jakarta better. Check them out!

This striking monument (known locally as ‘Monas’) is the best-known landmark in Jakarta. Its crowning feature is a massive, flame-shaped ornament of solid gold perched at the top of the obelisk. Commissioned by Sukarno in the 1960s, the monument is a tribute to Indonesian independence and hard to miss, dominating much of the surrounding area. The main Sudirman-Thamrin avenues in Jakarta lead to the Merdeka Square, wherein its center stands the National Monument (also known as Monas or National Monument) which houses the first red-and-white flag flown at the Proclamation of Independence on 17 August 1945. This flag has now become threadbare, and so nowadays on Independence Day ceremonies, the original flag is taken out but only to accompany the replica flag to be flown in front of the Merdeka Palace.

The 137 meters tall National Monument is obelisk-shaped and is topped with a 14.5-meter bronze flame coated with 32 kilograms of gold leaf.

Kota Tua Jakarta is the central tourist area in Jakarta. The main attractions here are strung across a network of cobblestone streets that also host a variety of dining and shopping venues. Located in the very heart of the City district is the Taman Fatahillah plaza, where the ambient nostalgia transports visitors back through time. Kota Tua is a remainder of Old Batavia, the first walled settlement of the Dutch in the Jakarta area. It was an inner walled city with its castle.

The area gained importance during the 17th-19th century when it was established as the de facto capital of the Dutch East Indies. These include the Jakarta History Museum, otherwise known as the Fatahillah Museum, after the admiral and national hero who gave Jakarta its primordial name, ‘Jayakarta’, literally ‘town of victory’. While most of the buildings are in a somewhat derelict state despite some functioning as museums, continuous restoration efforts have been proposed, with the latest agenda of pushing the old town spanning 130 Ha to be included in UNESCO’s world heritage list.

This beautiful mosque is the largest in the whole of South-East Asia. The mosque was built to commemorate the nation’s independence from the Netherlands in the mid-20th century. This majestic local landmark employs minimalist decorative touches and is reminiscent of mosques in Arabic nations. First opened to the public by Indonesia’s first President, Soekarno, on 22 February 1978, the grand Istiqlal Mosque of Jakarta is the largest in Southeast Asia both in structure and capacity, as it can accommodate congregations of up to 120,000 people. November 2010, US President Obama and First Lady Michelle Obama made a special visit to the Istiqlal mosque. An aside note which the President heard from the leader of the mosque, and which he relayed to the press, was that during Christmas mass, the mosque’s parking lot is used by the Cathedral’s congregation across the road. And vice-versa during Eid prayers. President Obama praised the Istiqlal Mosque as a symbol of religious tolerance which characterizes Indonesia and Indonesians, inspiring the world.

Jakarta’s neo-Gothic Roman Catholic Cathedral stands on the north corner of Banteng Square, or Banteng Square, which, during the Dutch colonial period was called Waterlooplein, or Waterloo Square in Central Jakarta. Today, the Cathedral stands right across Jakarta’s largest mosque, the Istiqlal Mosque. Facing the church’s parking area is the statue of the Holy Heart of Jesus. This neo-gothic church was consecrated in 1901 having been rebuilt at the same location where previously stood the old cathedral, which was built in 1829 but collapsed in 1890. As the Dutch were Protestants and prevented the spread of the Catholic faith in the East Indies, the church was left in ruins. It was not until Napoleon Bonaparte conquered Europe, and placed his brother Lodewijk (Louis Napoleon) on the Dutch throne that Catholicism was again allowed to be spread in the archipelago. During Easter and Christmas, when congregations overflow, tents are pitched on the parking lot to allow the hundreds to pray, by the following mass through TV monitors.

Those are 4 recommendations for Sights and Landmarks that you can visit in Jakarta. We hope this article helps you to get references to having such an exciting experience in Jakarta. Happy exploring and have fun. Also, don’t forget to read other recommendations in our blog! A lot of choices start from restaurants, pubs, and others.