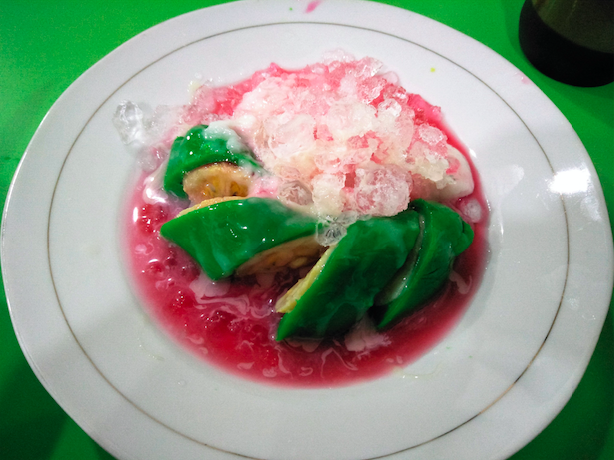 Indonesia is rich in culture and it’s the heart of many aspects of life, such as music, social culture, languages, to even foods and drinks! For years, Indonesia has been known for its flavorful food, but have you ever head of their dessert drinks or Es? Es literally translates to ice and that’s what most of these dessert drinks consist of. There are so many varieties of these dessert drinks that are scattered across Jakarta alone. Better yet, most you can find at local traditional night markets! So, if it’s hot and you want to try some fresh local desserts, then here’s a list of 5 authentic Indonesian dessert drinks in Jakarta!

Es Campur is one of the most famous traditional drinks in Indonesia. Like its name, its a mixture of all kinds of jelly and fruits along with coconut milk, brown sugar, and shaved ice. To give it a perfect touch, its added with the sweet condensed milk and red pandan syrup. One of the tastiest Es Campur in Jakarta is Es Campur Sinar Garut Gunung Sahari that is located in Central Jakarta.

This drink is one of the most traditional drinks that Indonesia has! It consists of coconut milk, brown sugar, and shaved ice. Added with the thinly-shaped green rice flour jelly called cendol. This refreshing cold and sweet drink are suitable for hot days. The savory coconut milk and sweet brown sugar balance the flavor, making you want more! Sometimes it’s served with jack fruit making it more refreshing! One of the places that serve this drink is Pondok Es Cendol that is located in Central Jakarta

This traditional drink is known from Makassar but has spread throughout Indonesia because of its delicious taste. It is a banana that is coated in think green pancake-like skin made out of starch, flour, and coconut milk. The chewiness and savory taste of the pancake compliments the sweet yet slightly tart banana. It’s then served with shaved rice, sweet porridge, condensed milk, and pandan syrup. Overall a beautiful wholesome dessert. One of the places that serve Es Pisang Hijau is Kedai Es Pisang Ijo Pemuda that is located in Central Jakarta.

This drink is also quite famous in Indonesia. Es Teler is almost as similar as Es Campur, except the fruits incorporated are mainly avocado, jack fruit, and coconut. It’s not served with brown sugar, but it’s served with shaved ice covered in condensed milk and pandan syrup. You can buy this dessert at Es Teler Sari Mulia Asli located in Central Jakarta.

Sop Buah is everyone’s favorite dessert. Like its name, its practically a fruit soup. It’s a bit sour from the fruits but the sweetness from the soup provides balance to the dessert. The soup is made of pandan syrup and shredded ice along with sweetened condensed milk. The fruit varies from jack fruit, guava, melon, mango, grapes, and so much more! It’s a classical refreshing dessert. You could buy this dessert at Juice & Sop Buah KABITA that is located in Central Jakarta.

So there you have it, 5 great Indonesian dessert drinks in Jakarta that you have to try! You could actually find it anywhere because these desserts are also categorized as street fruits. No matter where you buy it, it’ll still be just as refreshing and delicious!