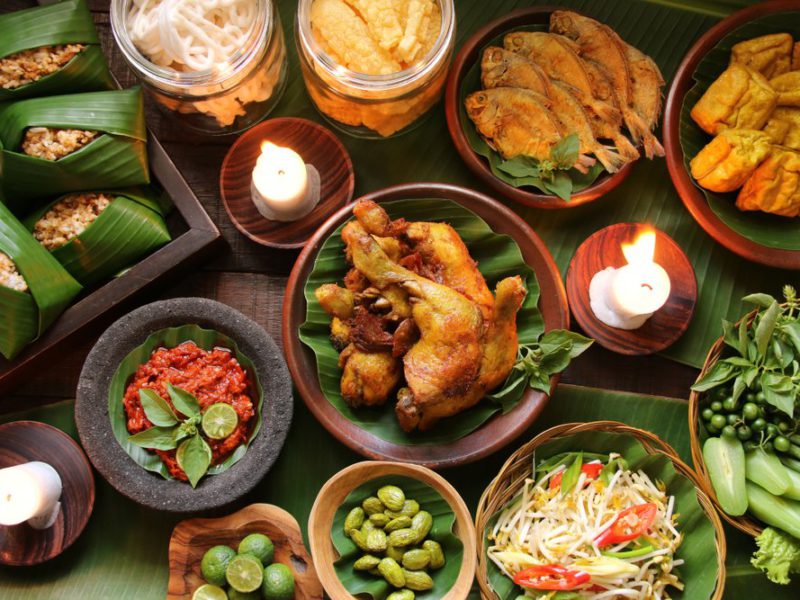 10 Recommendations for Typical Indonesian Food that You Must Try

Indonesia is known as an archipelagic country that has a variety of cultures and serves a variety of dishes that have their characteristics. Having fertile land to be planted with spice trees makes Indonesia one of the famous countries to foreign countries to visit and taste the various culinary available. Several Indonesian specialties have gone global and received positive appreciation from foreign citizens. Check out the full list of 10 typical Indonesian food recommendations which will be discussed further in the following article.

Read also: Indonesian Traditional Foods You Can Find in Jakarta

The first recommendation for typical Indonesian food that you must try is sate padang. Originating from Padang, West Sumatra, this Indonesian specialty is famous for its spices that will whet your appetite. Sate padang is made from spices such as cumin, ginger, galangal, and chili.

The spices are then mashed and sauteed until the aroma is fragrant. Some of the seasonings will be used to marinate the satay meat and make the sauce. The marinated meat is then grilled on a charcoal grill until cooked and ready to be served on a plate along with ketupat and a delicious thick sauce.

Moving on to the East Java area, one of the typical Indonesian food that you can try is rawon. The brownish-black color of rawon sauce comes from the keluak, which is the fruit of the kepayang tree. Before cooking, keluak must be boiled and soaked in ashes for one month. This step is to ferment the venom keluak freshly picked from the tree.

Apart from keluak, other spices that are also used to make rawon are ginger, candlenut, turmeric, red chili, and salt. The meat is boiled with the spices until cooked and delicious then served with a plate of warm rice. The taste of peanuts in rawon as well as the savory blend of spices and meat will make you fall in love with this one-of-a-kind Indonesian food.

Pempek is a typical Indonesian food that comes from the Palembang area, South Sumatra. Pempek is made from fish dough which is finely ground together with tapioca flour to add elasticity and texture. There are various types of pempek ranging from submarine pempek, lenjer, curly, leather, to lenggang.

Each type of pempek has a different shape and there are additional ingredients such as pempek submarine which contains eggs wrapped in dough. Pempek will be fried first until crispy and then served with cuko sauce which tastes sour and savory.

The next typical food of the archipelago comes from Solo, Central Java. Nasi liwet is found in many corners of Solo, especially when you want to find breakfast in the morning. But at night, you can also find nasi liwet on the side of the road while enjoying the night atmosphere of the city of Solo.

Nasi liwet is a food menu that contains rice cooked using coconut milk and chicken broth and added lemongrass and bay leaves to make it more fragrant and delicious. Nasi liwet is usually served with chicken pieces, eggs, and fried chili sauce. The savory coconut milk that seeps into the rice and the spicy chili sauce will increase your appetite.

Rendang is a typical Indonesian food that is quite well known in various parts of the world. The main ingredient for making rendang is beef stewed in coconut milk accompanied by other spices, such as garlic, ginger, laos, red chili, turmeric leaves, shallots, lime leaves, candlenut, coriander, cardamom, cinnamon, nutmeg, cloves to kandis acid.

You need at least four hours to cook the rendang until it is absorbed and tender. Some people also cook more than that to produce rendang with a drier characteristic. Rendang is usually served with warm white rice or as a complementary side dish on the nasi padang menu.

Back to the Java area because apart from rawon, there are also Indonesian specialties that are no less famous for their sweet and savory taste, namely Gudeg. This gudeg dish is already very well known and you can easily find it if you are visiting the city of Yogyakarta, so it is not wrong if this city is also known as the City of Gudeg.

Gado-gado is a typical Indonesian food originating from Jakarta or the Betawi Tribe. Gado-gado is a dish consisting of various kinds of vegetables, such as bean sprouts, cabbage, potatoes, spinach, etc. which are boiled until cooked and then doused with peanut sauce which has a sweet, spicy, and savory taste. Gado-gado is usually served with accompaniments such as pieces of tofu, tempeh, or eggs. This food is a dish that is suitable for those of you who like to eat healthy food because it does not contain meat but is very delicious to eat.

Still discussing the typical Indonesian food originating from the Betawi Tribe and no less famous as gado-gado, namely egg crust. You can easily find this dish around the city of Jakarta. Kerak telor consists of glutinous rice and eggs fried in the form of a pancake or omelet and topped with fried grated coconut and fried onions.

Lumpia is a typical Indonesian food that comes from the city of Semarang, Central Java. This dish can be filled with several choices of ingredients such as meat, bamboo shoots, eggs, and shrimp.

The last recommendation for typical Indonesian food is Soto. This dish has various types with different regional origins. Soto itself is a dish served with a soup-like sauce made from meat and vegetable broth.

Those are 10 recommendations for typical Indonesian food that come from various regions in Indonesia and have their characteristics. Which food would you like to try?