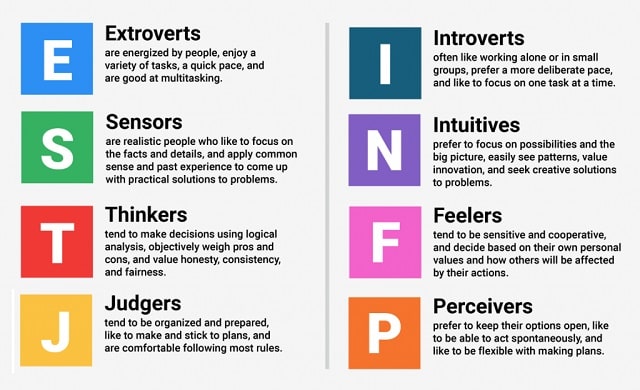 Get to Know What is MBTI and 16 Personality Types

Have you ever felt like you’ve lost your sense of yourself? Instantly you are in a situation where you no longer understand what you want or need. Then, have you ever found it difficult to understand other people? If you feel that way, maybe it’s time for you to get to know your personality and that of others.

Did you know, that recognizing personality can be done in various ways. In addition to assessing using your perspective, you can also use other methods, such as asking for feedback from others or using psychological tests.

Through the help of psychological tests, you can see many things about yourself that you were not aware of before. One of the most popular psychological tests to identify your personality and that of others is the MBTI or The Myers-Briggs Personality Test, which is a personality test that asks questions about a person’s preferences in four different domains.

Based on the assessment of the four domains, you will be grouped into one of the 16 personality types available. From these groupings, it is hoped that it will be easier for you to understand your likes, dislikes, weaknesses, strengths, types of careers that are suitable for choosing, and compatibility with other people around you. Curious about how the MBTI test works? Check out the full answer in the following article.

Read also: What is a Minimalist Lifestyle and Tips for Implementing It!

The MBTI or The Myers-Briggs Personality Test was originally developed in the 1940s by Katharine Cook Briggs along with her daughter, Isabell Briggs Myers. The MBTI itself was developed based on the personality typology created by psychoanalyst Carl Jung which caught the attention of Briggs and Myers.

Hoping that this theory of personality grouping can be applied in real life, Briggs and Myers began to research and develop indicators of personality types so that they can be used to understand the differences between each character during World War II. After that, the MBTI personality test was first distributed directly by Briggs and Myers to their closest family and friends to be filled out using writing instruments.

What are the assessment indicators of the MBTI test?

According to the theory of psychological types discovered by Carl Jung, the division between extroverts and introverts refers to how humans interact with other human beings.

In addition, there is also a theory that states that extraversion has meaning as a person’s tendency to receive and channel their energy so that people who have extroverted tendencies will more often participate in activities related to intense social interactions and feel excited when spending time with other people.

On the other hand, introverts tend to spend more time on themselves. A person with this type prefers to interact deeply and intimately with fewer people and feels more energized when spending time in private.

Distinguishing whether a person is an extrovert or an introvert is not an easy matter. Extroverts and introverts are not two black and white things, if not one, they belong to the other group.

On the other hand, according to a member of the Department of Psychology at Northwestern University, Dr. And McAdams (2017), extroverts and introverts are a spectrum with a certain range. You can be very dominant whether you’re an extrovert or an introvert, but you can’t be 100% extroverted or completely introverted. This means that you are most likely a combination of the two groups.

You may often meet other people who have the principle of “learning by doing”. People who apply these principles are happy to involve themselves with new experiences so that they can be directly involved in certain fields and have the opportunity to learn from the experiences they have gone through. Because they explore the world practically, their thinking will tend to be more practical and realistic when facing a problem.

Meanwhile, some people rely more on their intuition. They spend a lot of time imagining and thinking abstractly.

Through the questions on the MBTI test, you will be helped to find out what tendencies you have based on these two things.

After you collect information with sensing and intuition, you can process the available data into knowledge that will be a consideration for you in making decisions. In this case, there is also a spectrum that will compare the way you consider and decide things.

If you are someone who likes to make decisions with empirical data or an objective and tested theory, of course, you will tend to be on the Thinking spectrum. When you make a decision, you learn from the facts of your own experience as well as the past of others to make sure you don’t make that mistake again in the future.

Meanwhile, if you’re someone who decides from your heart or by considering the people around you, you tend to be on the Feeling spectrum.

After looking at the three previous elements that have been discussed, of course, it will not be complete if you don’t see how you handle things that happen in the outside world.

It also relates to the way you carry out the decisions that have been made previously. If you have a Judging tendency, then generally you will be more firm in your stance. It’s certainly not easy for you to compromise on certain things that are judged not to be by your life.

On the other hand, people who have a Preserving tendency will be more flexible and able to adapt to new things, especially things they have never thought of before.

Well, these four elements will form a combination of your personality. Based on each element of the personality type, you can get input on the strengths that exist within yourself that may affect your future career opportunities.

If you have taken the test, you will get a four-letter combination that is obtained based on the most dominant personality on each scale. For example, if your MBTI test results show ENFJ results, it means you are an Extrovert, Intuitive, Feeling, and Judging personality.

The combination based on the four personality scales described in the previous section will produce one of 16 different personality types. For further discussion, please read the explanation of each of the 16 personality types below.

ISTPs are generally very realistic, logical, spontaneous, and focused on the present. People with the ISTP personality also have good problem-solving and crisis skills. No wonder the ISTP person is often dubbed “the mechanic” or “the craftsman”.

The ISFJ is one of the most common personality types. A person with an ISFJ personality is usually known as a person who is attentive, warm, and has a positive aura that can bring peace to those around him. That’s why ISFJs are often referred to as “the protector.”

ISFPs are usually people who can make people around them feel comfortable, have a high concern for others, are passionate, and are creative. People with the ISFP personality type are generally also very talented in the arts. Therefore, he is often referred to as “the artist” among other personality types.

The INFJ, also known as “the counselor,” is the rarest personality type in the world. INFJs are usually very supportive, sensitive to the feelings of others, and helpful. Not only that but someone with this personality type is also known for his idealism to change the world into a better place for everyone.

INTJs are generally creative and analytical individuals. Therefore, someone with this personality type is very good at making strategies and planning. In addition, INTJs usually can create innovative solutions for every problem. As such, the INTJ person has earned the nickname “the strategist.”

A person with an INTP personality is nicknamed “the logical” or “the thinker” because they are logical, analytical, and broad-minded thinkers. However, INTPs usually don’t like rules and planning. On the other hand, he prefers to have a lot of choices about things.

ESTPs are usually very friendly, enthusiastic, and good at making friends. A person with this personality type is also usually very good at influencing others and can think and act quickly in emergencies. For this reason, ESTPs are often referred to as “persuaders”.

The ESTJ personality is dubbed the “decisive director” because he is best known for his ability to organize and lead. The ability to direct this is obtained from the characteristics of being firm, thorough, disciplined, obeying the rules, and responsible.

Someone with an ESFP personality can probably be called the most extroverted personality. This is because ESFPs love spending time with other people and love being the center of attention. No wonder the ESFP person is nicknamed “the entertainer”.

ESFJs tend to be soft-hearted, loyal, friendly, and organized. This personality type likes to help other people, especially those around him. That’s why the ESFJ person is referred to as “the caregiver.”

The ENFP is often referred to as the “motivator” among other personality types. This is because people with the ENFP personality type are very happy to collect positive ideas to help others and can channel that positive energy into the people around them.

ENFJs are known for their ability to form friendships with almost every other personality, even those who are very secretive.

Usually, someone with this ENFJ personality type also has high empathy, so they are very happy to help others in achieving their goals. Thanks to these characteristics, the ENFJ person is nicknamed “the protagonist”.

Someone with the ENTP personality is usually known as a logical, intelligent, creative, and argumentative person. Thanks to these qualities, the ENTP person often gets the nickname “the debater”.

Someone who has an ENTJ personality is usually an extrovert who is assertive, confident, and outspoken. Generally, this person is also very visionary, which means that he is more focused on thinking about the future than the present he is facing. That is why this person is often dubbed “the commander”.

You need to remember that The Myers-Briggs Type Indicator or the results of this MBTI test do not show either wrong or a right result. On the other hand, the results of the MBTI test are done to help you recognize the potential and advantages that exist within yourself.

However, if after taking the MBTI test you still find it difficult to see your potential, there is nothing wrong if you consult with a psychologist about this problem.